Since her tribute to the track star Usain Bolt went viral, Koffee has shown she has staying power.H

KINGSTON—Toward the end of August 2017, a 17-year-old Jamaican musician named Mikayla Simpson uploaded a video of herself singing to her Instagram account. In the short clip, she strummed her acoustic guitar and performed “Legend,” a record she’d written as a tribute to the country’s famed track star Usain Bolt. “Yuh nuh need no medal with a heart of gold, yuh stay humble inna yuh glory,” she sang about the Olympic champion. “If the times get slower and yuh start get old, mi still remember yuh story.”

Soon after, Bolt saw the video and reposted it to his own account, where it has since been viewed nearly 300,000 times by his several million followers. In the year and a half since recording that first video, Simpson, who sings under the stage name Koffee (sometimes Original Koffee), has been wholeheartedly embraced by some of Jamaica’s most famous musicians—and by their fan bases. At the January 2018 edition of the annual reggae festival Rebel Salute, the veteran artist Cocoa Tea introduced Koffee to a massive audience one month before her 18th birthday. Now 19, the DJ and singer-songwriter—or “singjay,” in island parlance—has already performed alongside contemporary icons such as Chronixx and Protoje.

When we spoke in Kingston’s Mountain View clearing late last month, a day before the release of her Rapture EP, Koffee marveled at the support she’s received from industry legends. “Being a young artist, you know that you’re not the first and there are a lot of people who have been there before you to basically look up to—people who have been setting examples forever,” she said. “They’re the foundation for the music that you are here experiencing and listening to now, [so] to know that you can … reach out to them and have them give you advice and just guide you along your journey, it’s a very comforting feeling.”

Raised in the Eltham View neighborhood of Spanish Town, about an hour outside Kingston, Koffee drew her first musical influences from the artists her Seventh-Day Adventist mother played in their home on Sundays. The musicians on rotation represented a diasporic melange—American R&B and soul singers such as Aretha Franklin and Etta James, as well as classic reggae artists including the Jamaican greats Beres Hammond, Dennis Brown, and, of course, Bob Marley.

Koffee taught herself to play guitar at age 12, after a friend let her borrow a spare, and began listening to modern reggae soon after. At 14, she made her first attempts to write within the genre. “I was listening to Protoje and Chronixx and dem flows and lyrics were very fascinating, and I was like, you know, feel like mi wan try this a little,” she recalled with a laugh. “And I just started playing around with lyrics, writing a few lines and trying to rhyme some words and getting bigger and bigger each time—so bigger words, more syllables, or longer rhyme schemes.”

During her final year at Ardenne High School in Kingston, Koffee auditioned for a talent show orchestrated by her music teacher. Though she’d never planned to pursue music full-time, the 17-year-old competed against a beatboxer and a few fellow singjays, and rocked a crowd that she estimated must have been nearly 1,000 people. “It was a huge moment for me,” she said of the competition. “And it basically gave me my first confidence in being able to perform and deliver music live.”

The Bolt tribute, and the resulting onslaught of attention, came a few months later. Among the viewers of Bolt’s Instagram repost, for example, were representatives of the Jamaica-based label Upsetta Records, who asked Koffee to join reggae veterans such as Busy Signal and Jah Vinci in singing on Ouji Riddim, a collaborative record on which each singer recorded their vocals over the same production, or “riddim.” Her contribution, the October 2017 hit “Burning,” showcased a young artist whose vocal dexterity could handle flows beyond the stripped-down acoustics of “Legend.”

At turns solemn and celebratory, “Burning” keenly reflects Koffee’s interest in producing music that speaks to the concerns and triumphs of Jamaicans. The record is personal—she wrote the song after failing to gain entry into sixth form, or a precollege program of sorts, but her anxieties about education reflect broader patterns among the country’s youth. Even so, the lyrics are resolutely hopeful. “Neva be ungrateful / Life is such a teacha,” she sings of the disappointment she felt upon learning of her results and the determination that kept her going. In this, she draws from the genre’s most iconic bards, whose music soundtracked moments of inner turmoil and political strife alike.

For Koffee, the stakes of her own trajectory remain high well after the setback that inspired the track. “I think it’s good to have a positive influence on youth sometimes. That’s wavy,” she said of her mission to push through the grit that characterizes Jamaica’s contemporary musical scene. The singer knows that teenagers aren’t listening to the kinds of artists they associate with their parents, but she wants to channel the social consciousness of legends such as Bob Marley with a fresh twist. “I try to modernize positivity very distinctly,” she added. With its infectious melody and bouncy spirit, “Burning” is also the record that piqued the interest of Major Lazer’s Walshy Fire, who would later co-produce her debut single, “Toast,” with the Jamaican sound engineer Izybeats.

The day after Koffee and I spoke in Kingston, I was in Tracks & Records, the Bolt-owned café across the island, in Montego Bay, when “Toast” started playing over the sound system. The air in the establishment shifted, and everyone present—tourists, local diners, and restaurant employees alike—seemed to pause for a moment to smile, or to sway. Along with the impossibly catchy Izybeats and Walshy Fire backing, the sunniness of Koffee’s chorus is hard to ignore: “Blessings all pon mi life and / Mi thank God fi di journey, di earnings a jus fi di plus (Yeah) / Gratitude is a must (Yeah).”

Those who’ve seen the recent Jordan Peele thriller Us might recognize “Toast” as one of the songs that the teenager Zora (played by Shahadi Wright Joseph) listens to through her earbuds while ignoring the rest of her family. It’s the lead single for Koffee’s EP Rapture and the first song that captured the attention of American audiences.

Rapture is a tightly constructed 15-minute run; it’s a jolt of high energy and sharp songwriting. In culling the tracks for the record, Koffee drew from her own experiences as well as a deep love of her country and its musical legacy. “This is what I know—Jamaica. No matter where I go, how long I stay there … here is always home for me,” she said. “It’s like a paradise, I think, for somebody who was raised in Jamaica, especially ‘cause we get [to] see, like, the ins and outs and the day-to-day goings. Everything that I see around me in Jamaica comes out in my music.”

Rapture’s title track, the singer’s personal favorite on her EP, opens the record with a memorable first line: “Koffee come in like a rapture.” The 5-foot emcee mocks those who assert that her height will keep her from making a big impact (the dismissal is particularly sharp given the extent to which music, and especially reggae, is a male-dominated industry). On “Rapture,” Koffee “kill dem wid verbs and wid di pronouns”; she reminds listeners that this is her show. A different track, “Throne,” sees her noting that she’s “inna mi zone, alto to baritone,” a boast of impressive range.

Though she also listens to a number of American hip-hop artists, such as 21 Savage and Travis Scott, Koffee stays true to her national—and musical—roots on Rapture. On “Raggamuffin,” the EP’s final track, Koffee makes the case for both her own longevity and her genre’s. “Raggamuffin reggae beat yeh / Dancehall pan di street yeh,” she sings, “Caan stall nor defeat, 2030, we still a dweet.” Her delivery is at once jablike and inspiring, reflective of the track’s cheekily confident lyrics and the broader legacy it evokes: The song takes its name from a reggae subgenre, the name of which is itself a reclaimed word that British colonizers used to designate black islanders. It’s that same irreverent ingenuity that makes Koffee’s music so exciting. As she put it, “The way I deliver is strictly Jamaican.”

If it's on regular radio, it's not real hip-hop.

Damian Marley on the legalization of weed, slave reparations and entering Jamaican politics 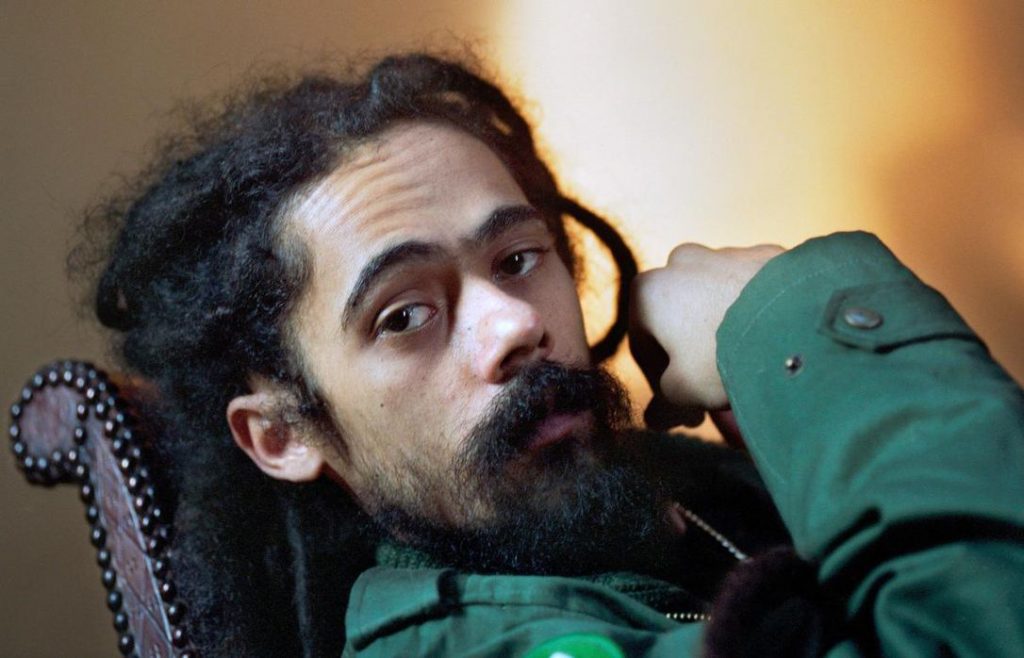