If you were surprised to hear about two black men arrested at Starbucks, you haven’t been paying attention

Starbucks, for all its talk about togetherness, is very much a white, middle-class brand

A little over a week ago, two black men were arrested at a Starbucks in Philadelphia for doing what many of us have done at least once: sat down without ordering anything.

The men reportedly refused to leave after being denied use of the washroom because they hadn’t bought anything. Yet many people pop in and out of Starbucks to use the washroom, and many people sit there without buying anything. And they don’t get arrested for it.

Sometimes we’re waiting for a blind date or a Tinder match to hopefully show up. Sometimes the line is too long (or often in my case, the baristas are too busy having a chat amongst themselves to take your order) so we wait for it to die down. Sometimes our business partner is running late. Sometimes it’s really cold or wet outside and we need a respite. This is the environment that Starbucks has created for itself.

In fact, Starbucks prides itself on being the place to be: your office space away from home. It welcomes you to stay: it offers free Wi-Fi and places to charge your devices. It even takes up more of your time by asking its baristas to slow down and bring back that “handcrafted” feel.

Much of its brand is about that relaxing atmosphere; it aims to make its cafes an experience rather than just places to breeze in and out. It’s focused on bringing people together, as its mission statement reads: “To inspire and nurture the human spirit – one person, one cup and one neighborhood at a time.”

But Starbucks, for all its talk about togetherness, is very much a white, middle-class brand. It’s found in gentrified areas. In comparison to other popular North American coffee companies, it’s expensive and its menu can be difficult to understand (Venti non-fat, extra hot, no foam, 12 pumps of syrup caramel macchiato latte, please). Its brand philosophy is about being a socially ethical company.

For many people of colour in the U.S. — who are disproportionately affected by poverty — Starbucks is unattainable, at least on a daily basis. It’s an insider’s club at best, a strategic initiative geared toward drawing in its preferred type of customer and keeping the others out. 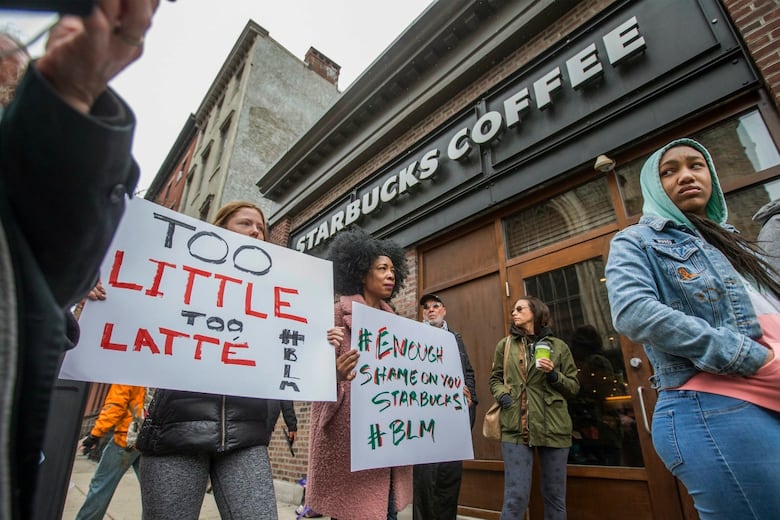 Protesters gather outside of a Starbucks in Philadelphia where two black men were arrested. (Michael Bryant/Associated Press)

Starbucks is not particularly unique in being a white and middle-class space: in fact, most public spaces can be characterized this way. Jane H. Hill explored this idea in her 1998 journal article “Language, Race, and Public Space,” in which she describes the ways that people of colour are under constant, intense monitoring — of their speech, of their presence, of their appearance — while in white spaces.

The incident at Starbucks earlier this month was a testament to what happens when black bodies enter a white space. Immediately, the men were deemed suspicious for doing something that employees know dozens of people do at their store each day.

The neighbourhood where the men were arrested is Rittenhouse Square, one of the wealthiest areas of Philadelphia, where a large majority of inhabitants are white.

In other words: the men were most definitely in wealthy, white space. Their presence scared the manager. And what do we do when we’re scared of someone? We call the police.

Black people have always been viewed as inherently criminal, but that’s especially true for black men, who have long been stereotyped as dangerous, violent and brutish. One black man is often enough to make someone nervous. Two makes people think something’s about to go down.

We know from various studies that people tend to see a black man as larger and more threatening than a white man of the same stature. We also know that black men are overrepresented in carding and stop-and-frisks.

We know that those of minority groups are most likely to be the victims of police brutality, and that police have even taken to shooting dead unarmed black men. We definitely know the role that stereotypes, racism and discrimination play in these issues.

Black and brown bodies, once they enter in white spaces, are often and immediately perceived as a threat to the perfectly established whiteness — the normalness — of the area. People experience fear because they’re not supposed to be there; they’re supposed to be in some far-away place closed into itself: the hood. The ghetto. Public housing. Somewhere where they are not a nuisance.

Fear of looking suspicious is why so many black people are careful when walking through these spaces. Parks. Sidewalks at night. Museums. The ballet. “Upscale” restaurants and bars. Coffee shops.

To be clear, this is not just a problem in public spaces in the U.S.. As Canadians, we tend to deflect when we hear about acts of racism down south, but that doesn’t mean the same sort of divisions don’t happen here also, with certain types of people filtering into certain coffee shops, and others filtering into the rest.

Meanwhile, at the time of writing, Starbucks Canada has not said whether it intends to follow its U.S. counterpart’s plan to shut down thousands of stores in May to give employees “racial-bias training.”

After the incident became international news, Starbucks CEO Kevin Johnson issued a personal apology to the men who were arrested. In a statement, he said that the actions in the video “are not representative of our Starbucks mission and values.”

But isn’t it? Starbucks brand seems like it was never meant to include black people — it was meant to centre whiteness. It was only a matter of time before one of its employees was caught on camera reminding us that it’s not where we belong.

This column is part of CBC’s Opinion section. For more information about this section, please read this editor’s blog and our FAQ.

Eternity Martis is an award-winning journalist. Her work, namely on race and gender has been featured in Vice, Salon, Hazlitt, TVO.org, The Walrus, The Huffington Post, and many more. In 2017, she was a finalist for the National Magazine Awards’ Best New Writer.
Tagged as Abuse News Police Racism Wahgwaan We