The city’s mayor described the assault as “deeply disturbing,” vowing not to tolerate violence against women.

Pittsburgh Police Department arrested a male employee of Milano’s Pizza shop on Saturday night who was caught on video assaulting a woman on Friday night in the restaurant. Mahmut Yimaz, 41, turned himself in to police officers and was charged with one count each of simple assault and aggravated assault, a police statement said.

RELATED:  More Black Women Are Killed In U.S. Than Any Other Race, Says CDC

“It is my sincere hope that these charges are another step in sending a very clear signal that Pittsburgh will not tolerate violence against women and that we will work as a community to protect all women, and notably African American women, from physical and emotional violence,” Mayor William Peduto said, describing the video as “deeply disturbing.”
https://www.youtube.com/watch?v=tzq8GBtrx0E

The video, posted on Facebook, shows Yimaz telling the victim, Jade Martin, to leave the restaurant. After she ignored his order, Yimaz grabbed Martin at the door and pinned her to the ground. He then pushed her into a few rows of tables and chairs, as he forced her toward a wall and appeared to bang her head on the ground. A few other employees rushed over to end the assault and push Martin out of the restaurant. After seeing the video, a group of angry protesters demonstrated outside the restaurant on Saturday.
Martin went to the hospital after the incident and filed a police report, according to WPXI.com. She had a large bruise on her forehead and may have had a concussion, Martin’s attorney, Todd Hollis, stated. Martin, who was not charged with a crime, has two children and did nothing to deserve the beating, he added. “That man could have murdered my daughter in this restaurant,” Darlene Wall, Martin’s mother, said.

African immigrants are more educated than most — including people born in U.S. 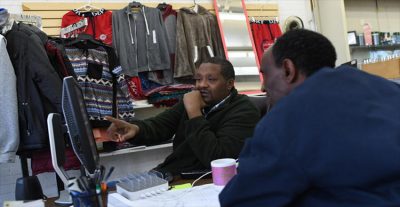