As protests against corruption continue, Canadian diplomats blame the people

As a wave of protests against high-level corruption rocks Haiti, Canada is backing the government in Port-au-Prince and its repression against demonstrators. The Ugly Canadian has once again shown his poor-bashing repressive face in Haiti, as Justin Trudeau continues Canada’s staunch support for that country’s reactionary elite.

Over the past three months, there have been numerous protests demanding accountability for the theft of public funds. Billions of dollars from Petrocaribe, a discounted oil program set up by Venezuela in 2006, were pilfered under former president Michel Martelly, an ally of current leader Jovenel Moïse. After forcing out the country’s prime minister in the summer over his plan to eliminate fuel subsidies, protesters are calling for the removal of Moïse, who assumed the presidency through voter suppression and electoral fraud.

Media reports say a dozen protesters have been killed since a huge demonstration on Oct. 17. But there is evidence that the police have killed many more.

Ottawa is supporting the unpopular government and its repressive police force. While a general strike paralyzed the Haitian capital of Port-au-Prince on Friday, Canadian Ambassador André Frenette met with the new prime minister, Jean Henry Céant, and other diplomats to show support for the government.

Through a statement by the Core Group — made up of Canadian, U.S., European and Brazilian diplomats, along with special representatives of the UN Secretary General and the Organization of American States — Ottawa has blamed the protesters for the violence, even while a police force trained and funded by Canada fired on them.

“Acts of violence seeking to provoke the resignation of legitimate authorities have no place in the democratic process,” reads the statement in French and Kreyòl.

“The group praises the professionalism demonstrated by the National Police of Haiti as a whole on this occasion to guarantee freedom of expression while preserving public order…. change must come through the ballot box and not violence,” noted the group in a similar release at the start of the month.

A history of aggressive intervention

Ottawa has taken the lead in strengthening the repressive arm of the Haitian state.

Six years before that, Canadian prime minister Paul Martin played an important role in violently ousting Jean-Bertrand Aristide’s government. For the following two years after the overthrow of Haitian democracy on February 29, 2004, a Canada-financed, -trained and -overseen police force terrorized Port-au-Prince’s slums with Canadian diplomatic and (for half a year) military backing.

Since that time, Ottawa has taken the lead in strengthening the repressive arm of the Haitian state. (The country’s army, created during the 1915–34 U.S. occupation, was disbanded by Aristide in 1995.) Much to the delight of the country’s uber class-conscious elite, over the past decade and a half Canada has ploughed over $100 million into the Haitian police and prison system.

RCMP officer Serge Therriault currently leads the 1,200-person police component of the year-old United Nations Mission for Justice Support in Haiti. For most of the past 14 years, through successive UN missions, a Canadian has been in charge of the UN police contingent in Haiti, and Canadian officers have staffed its upper echelons.

The ambassador and the police

Since his appointment as ambassador last fall, Frenette has attended a half-dozen Haitian police events.

Canada is once again supporting the violent suppression of the popular will in Haiti.

Earlier this year, he took to social media to say he was honoured to attend a ceremony at the National Police Academy. “Canada has long stood with the HNP [Hatitian National Police] to ensure the safety of Haitians and we are very proud of it,” he tweeted in French in April. 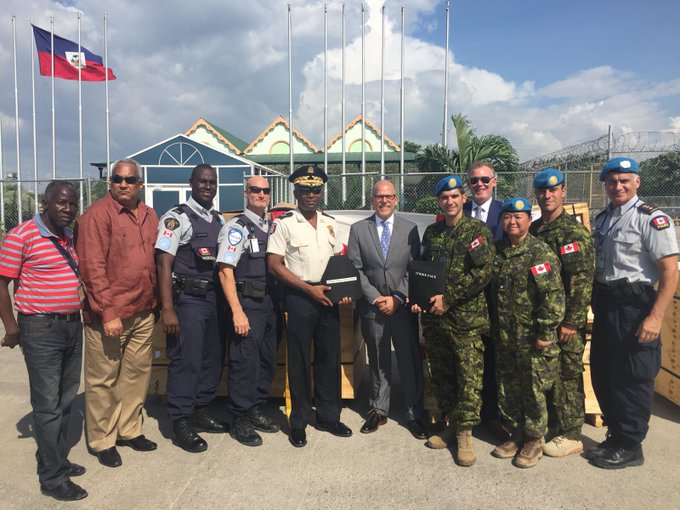 Canada is once again supporting the violent suppression of the popular will in Haiti. Justin Trudeau has taken off his progressive mask to reveal what is inside: The Ugly Canadian.

Yves Engler is the co-author, with Antony Fenton, of Canada in Haiti: Waging War on the Poor Majority. His latest book is Left, Right: Marching to the Beat of Imperial Canada.

An Introduction to Tinctures